School is open to provide childcare only for families of key workers and vulnerable groups. If you need to contact school urgently please email the school bursar. Stay safe.

Children from St, Joseph's once again  took part in the mass choir in  Pendle Festival.  This year they presented "Ocean Commotion"  They all did an amazing job and had a fantastic time performing at the 'Muni' in Colne.

A group of children have been visiting the Living With Dementia group at  Pendleside Hospice. As part of their visits they performed maypole dances and took part in a seaside themed finale staged by Dementia Positive Pendle ,where they danced and sang "Bobby's Girl".  This has been a wonderful experience for the children  which we have been privileged to be involved with.

The school took part in World Book Day and once again the children and staff came in amazing costumes. We had lots of 'booky' activities, listening to stories and reading our favourite books.

Visit by the Mayor and Mayoress of Pendle

The Mayor and Mayoress of Pendle kindly visited school . They spoke to the children who listened carefully about their role and looked at his chains. They asked some wonderful questions and learned about the history of the chains.

The school had another visit from the Life Caravan, where the children took part in a variety of programmes. Reception met Harold the Giraffe and learned 'All about me', for Year 1 it was 'My Meet the Brain', in Year 2 we looked at 'Feelings', Year 3 had a chance to  learn about 'My Wonderful Body' , Year 4 found out 'It's great to be me', Year 5 explored 'Friends' and Year 6 explored 'Decisions'. The children thoroughly enjoyed this experience and gained lots of amazing scientific knowledge. 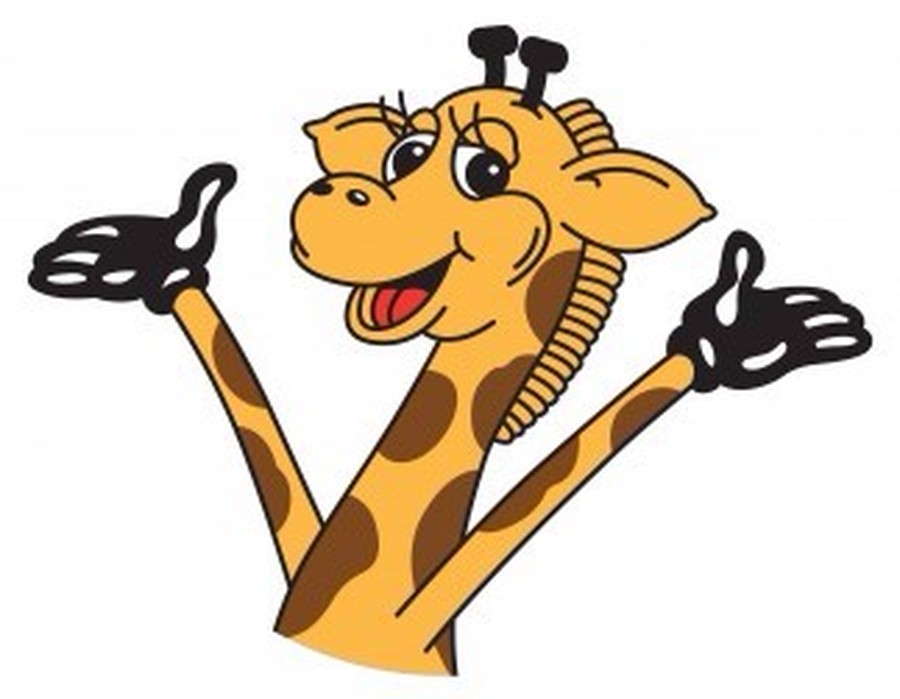 Our member of parliament Mr Andrew Stephenson visited the school to present some awards. Whilst he was here, he spoke to Key Stage Two who listened really well and asked some fantastic questions. Thank you Andrew for explaining your role so well and helping our children to understand democracy.

Keystage 1 presented Magical Christmas Journey as their Nativity play this year.  They had a wonderful time taking part in this lively production and gave fantastic performances.

Year 6 took part in First Aid training with the Red Cross where they learned basic first aid  and how to perform life saving CPR.

We were very lucky today to receive a visit from Andy Griffiths @poetryworkshops as part of our participation in the Literacy festival at Broughton Hall. Children laughed and thoroughly enjoyed his poems which even included one written just about us! Thank you Andy.

Some of our pupils have had the opportunity to explore our new Forest School area, where they took part in team work and problem solving activities.

Class 4 and Class 5 had the opportunity to take part in workshops run by Wartburton's bakery where they made healthy sandwiches and learned more about the importance of a good diet.

The school took part in a sponsored event using the amazing inflatable target from Extreme Sports who have been running a very popular after school club this year.  The children could either kick or throw the ball at the target .

Visit by the High Sheriff of Lancashire.

The school was visited by Mr Anthony Attard OBE DL, who told us about his role as High Sheriff of Lancashire.  They were fascinated to see his ceremonial uniform and to discover the history of the traditional role of High Sheriff. Additionally, the children learned about the commonwealth ,the countries which are part of it and how young people can get involved in commonwealth activities.

The school was delighted to be visited by Natalie Haythornthwaite who won a commonwealth gold medal at the games in Australia.  Natalie was a pupil at St. Joseph's and told the children how her love of netball began at the school.  She told us about competing in the games and allowed the children to examine the amazingly heavy medal.  The children asked her lots of questions about her training, diet and how she prepared for competitions.

The children once again took part in the annual Easter Egg decorating competition.  There were some amazing and imaginative designs again this year and it was very difficult to choose winners from the different year groups.

Class 1 and Class 2 visited Barnoldswick Library as part of the Storytellers Week, they listened to some wonderful stories and explored the library. They all had a lovely time and are keen to visit again.

The children in Key Stage 1  visited the Municipal Hall in Colne to see the Pantomime, Snow White.  They had a fantastic time watching this colourful performance.

The school had another visit from the Manchester Actors Company, who presented their version of Aladdin.  It was another wonderful performance with lots of jokes and interaction.

On the 4th of July, Class 5 presented their summer production of "What a Knight!"  The children gave an amazing performance,  full of  hilarious jokes, fantastic acting and wonderful singing.

On Monday 19th June five pupils from Year 6 represented St. Joseph's at a quiz. The quiz was run by the Knights of St Columbus. Four Catholic primary schools entered (ourselves, Holy trinity, Holy Saviours and Sacred Heart) It was a close finish but we won! We have the shield on display in school. Well done team!

Year 5 children visited the Garden Gate Allotments and had the opportunity to find out about the many different plants that are grown there.  The children were shown around the allotment site and then made their own beautiful hanging baskets.

We were visited by Dan Worsley the author whose books include: Eric Appleby and Impossible Tales.  He ran an amazing writing  workshop, explaining how he creates the characters in his stories and the process of writing and publishing a book. 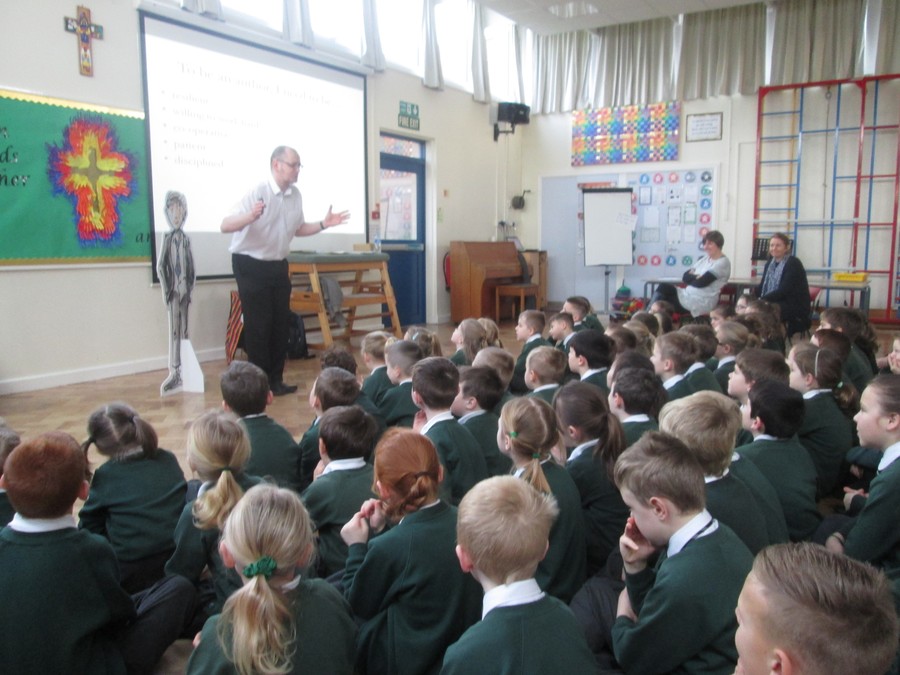 Paddy Spiller from Cafod visited the school to present an assembly about the plight of refugees. The children learned how people become refugees and about the work Cafod are doing to try to help them.

The school was visited by the Star Dome mobile planetarium and professional astronomer Mr Martin Lunn. The children had the opportunity to take a magical trip into the night sky to find the star patterns or constellations. They discovered the myths and legends of heroes and of ancient Greece and learned how to find the Plough, North Star and Orion. Children and families of St. Joseph's Catholic School collected and filled 90 shoeboxes for Operation Christmas Child. It is an amazing achievement for our small school. This project helps our children to learn about the wider world and realise how many things we take for granted in our daily lives. We hope these boxes bring some special joy to others less fortunate than ourselves.

Visit from the Bethany Family The school was fortunate to receive a visit from the Bethany Children's Choir who are part of the Bethany Family from Tanzania in Africa.

The Bethany Home where the children live provides a home for orphaned, abandoned or abused children. The children live as one big family in the home which provides them with education and until they are able to support themselves.

The choir performed some amazing and inspiring songs and some of the group told us about their lives in Tanzania and how they had become part of the Bethany Family. The school held a 'Dress in Green ' day to help raise money for the charity NSPCC. Speak out Stay safe is delivered by specially trained NSPCC staff and volunteers. It consists of an assembly presentation for children aged 5-11 followed by a classroom workshop for children in years 5/6. Children throughout school learned about keeping safe and understanding they have the right to speak out and stay safe. They also met their mascot 'Buddy'. We raised £118 which will support the charity to help other children in need.

We had a lovely visit from Mr and Mrs Pollit and their guide dog in training Belle. The children very involved in the visit and participated in a blindfold feely bag challenge. We would like to thank Mr and Mrs Pollit for teaching the children the importance of guide dogs and the challenges faced by people with visual impairments. 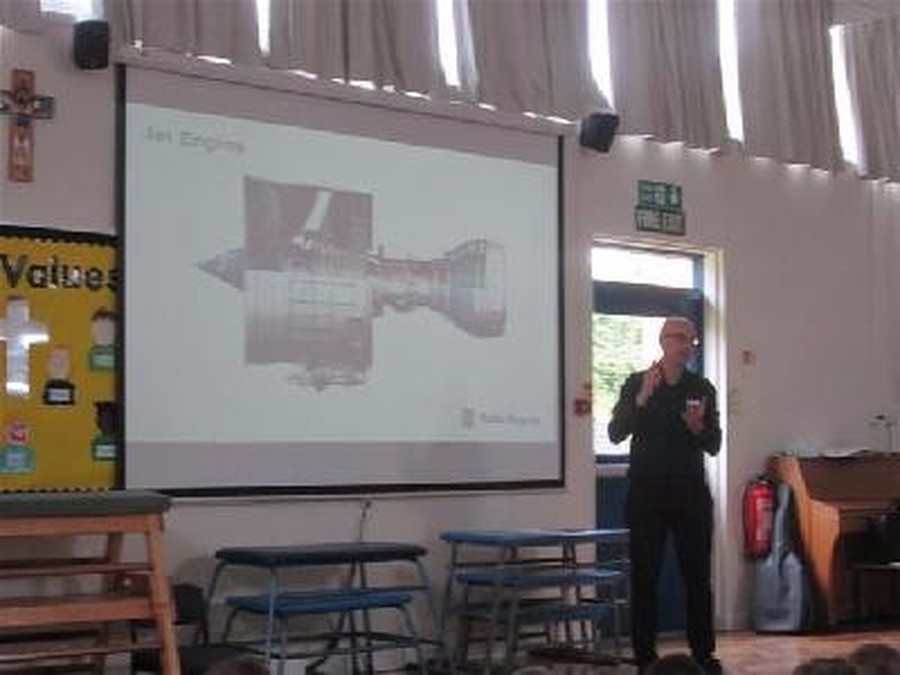 The school had a visit from representatives from Rolls Royce in Barnoldswick who showed the children the work they do in the local factories.

Children later had the opportunity to visit the factory and see first hand how aero -engine blades are manufactured.

Keystage 2 took part in Election and Voting workshops where they learned about the voting process and how a bill becomes a law in the parliamentary system.

The workshops were run by Rachael Dodgson the Regional Education Outreach Officer and our MP Andrew Stephenson also visited for a question and answer session.

Paul Hodson an education officer from Blue Cross visited school to talk to pupils about dog safety. This is part of Jade's campaign which was launched in 2014 following the tragic death of a child after an incident with a pack of dogs. The children learned about dog body language and techniques to keep them safe when encountering dogs. Both the staff and children found it to be a very informative and worthwhile visit. As part of our World Book Day we had a visit from the Lancashire Library Story Bus. The children from Reception and Year 1 were treated to poems and stories and were shown some new publications that were hot off the press! Class 5 and Class 2 had a visit from the Lancashire Fire Brigade Fire Safety representatives. The children learned how to help keep themselves and their families safe in a fire and about the important role the emergency services play in our area.

Year 5 and 6 enjoyed an informative workshop on the dangers of smoking led by Lancashire County Council ' Home'.

Each group researched different aspects and of smoking, then reported back to other groups.

They discovered more about the dangerous chemicals that are in smoke and how secondary inhalation is harmful to the body both internally and externally.

Class 5 had a visit from the Dog Warden who told them about the important work being done to protect the environment and to ensure the welfare of the dogs in the Pendle area. The children were invited to take part in a local schools, to design posters to remind the public to clean up after their pets.

Classes 1, 2 and 3 had a visit from John and Tracy who run the Creepy Crawly Road Show. The children had the opportunity to see, and even hold, butterflies, giant snails, stick insects, cockroaches, spiders and snakes.

The children had a fantastic time learning all about these creatures and really enjoyed their close encounters with them.

On Monday 7th September the children watched the Tour of Britain cycle race pass through Barnoldswick. They researched the race, finding out the history and route that it was and made flags to wave as the cyclists passed by.

Thanks to the volunteers who helped walk the children to the viewing area, the children enjoyed seeing the riders and had an exciting time.

Children in Years 5 and 6 took part in a workshop run by WRAP, where they learned about the work they do young people to avoid becoming involved with extremist and radical organisations.